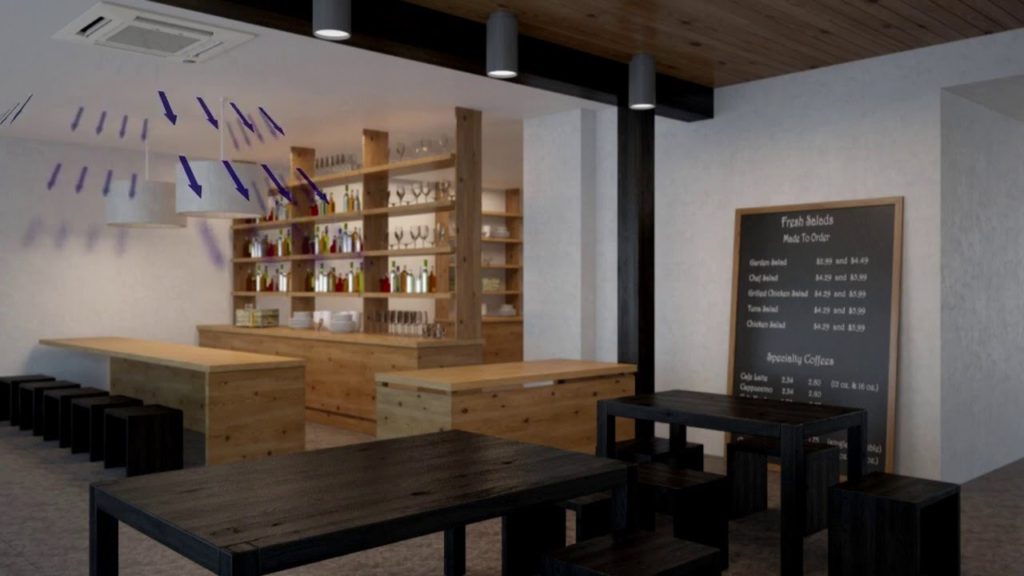 Across the country, more states are relaxing stay-at-home regulations and moving to allow the reopening of businesses after the COVID-19 pandemic shutdown.

In some states, that includes allowing restaurants to reopen with full service.

However, a new study raises questions about whether that’s safe.

The study suggests an outbreak of COVID-19 at a restaurant in China may have been spread by the air conditioning there.

“Outdoor transmission as far as we’ve seen has been more difficult than the indoor climate-controlled” said DeSantis. “So I think being outside, if you’re 6 feet away, to me that would not be more risky than going to Costco.”

The debate over whether the virus that causes COVID-19 could be transmitted via air conditioning began with an early-release letter in the journal Emerging Infectious Diseases that was published on the Centers for Disease Control and Prevention (CDC) website.

Scientists studied an outbreak of COVID-19 among three families that had lunch at a restaurant in Guangzhou, China, ‪on Jan. 23.

The scientists said they believe the source of the virus was a 63-year-old woman who didn’t show any symptoms at the time.

She and her family had traveled to Guangzhou from Wuhan and sat at what was labeled as table A in the study.

Eventually, nine other people got sick. They had been seated at two nearby tables, B and C. The restaurant did not have windows.

Researchers concluded it was likely the air conditioner that blew the sick woman’s droplets farther than they would have gone otherwise. None of the 73 other diners and 8 workers that day became sick.

The researchers recommended that restaurants increase the distance between tables and improve ventilation.

“So far, so-called airborne transmission by some sort of air conditioning unit really has been reported only once and I think is likely to be a very odd event,” said Dr. William Schaffner, an infectious disease expert from Vanderbilt University Medical Center in Tennessee.

“People have been going to pharmacies and grocery stores and liquor stores and other venues for some time now. We’ve had no reports here in the United States of infection related to a single source that could be attributed to air conditioning,” Schaffner told Healthline.

“What will be important for restaurants is that the wait staff wear masks and attend to good hand hygiene,” Schaffner said. “And that they disinfect surfaces between patrons.”

“This is an interesting study, but it doesn’t seem representative of what happens in everyday situations with this virus,” Adalja told Healthline.

“So far, the epidemiology really supports droplet spread and those droplets fall to the ground within 6 feet,” he explained. “There might be extraordinary circumstances where you might see this type of spread, but I don’t think it’s something that represents a major route of transmission.”

“But I do think that as we open restaurants and places where air conditioning is going to be running, they are going to have to think about what their air flow is like,” Adalja added. “They’re likely going to have to modify the way their seating is done to make it less crowded, to encourage social distancing, and hopefully that would eliminate these kinds of things from happening.”

The American Society of Heating, Refrigerating, and Air-Conditioning Engineers (ASHRAE) says it’s concerned about the possibility of aerosol transmission of COVID-19.

So, it has set up its own pandemic task force with industry scientists looking at the data.

William P. Bahnfleth, PhD, PE, is a professor of engineering at the Pennsylvania State University and chair of the ASHRAE Epidemic Task Force.

Bahnfleth points to an analysis of the restaurant study that found there was no outdoor air supply in the restaurant and that window exhaust fans were not operating.

It concluded that “Aerosol transmission of SARS-CoV-2 due to poor ventilation may explain the community spread of COVID-19.”

“A well-functioning air conditioning system in the restaurant that actively provided the appropriate amount of ventilation and had good filters for particulate matter would have greatly lowered the concentration of SARS-CoV-2 in the air, perhaps to the point that fewer diners would have contracted COVID-19,” Bahnfleth told Healthline.

Meanwhile, Bahnfleth says ASHRAE is advising its members to:

This site uses Akismet to reduce spam. Learn how your comment data is processed.

As a homeowner, saving money is... more»

Have you ever been to a restaurant and... more»

Routine maintenance on your Air... more»

Why Spring Is the Best Time to Replace Your AC Unit

For homeowners in need of a new air... more»

In Massachusetts, our HVAC systems... more»

How to navigate your business appliances through hibernation

With the kids back in school and fall... more»

Warning Signs You Have a Bad AC Condenser

An AC condenser is the part within an... more»

We are a family owned company that goes... more»

Reopening your restaurant? Here are some tips and guidelines for keeping your cool

There are a lot of details to consider... more»

A new study reported that an air... more»